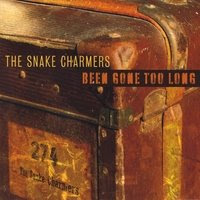 The Snake Charmers are Houston, Texas based band formed in 2002, by wife/husband Marie Angell singer/author and Will Blumentritt, who is responsible for bass lines. Marie and Will also added eldest son Eric in formation ( drums ) and guitarist Larry Meeker. A mentioned pair had a previous experience in different music ventures, but blues was and still is their first love.
"Been Down Too Long" features 10 bluesy inspired tracks penned by mentioned Marie Angell. Her soulful, pleasent voice create songs atmospheres, which oriantations/realizations also accepts some elements of swing and 50's music. "Been Down Too Long"album comphrises a few ballads and some so call half-ballads, and most of materias are done in mid to mid -up tempo. A musicians from band has offered a fine performings, and generally its album are consists of very listenable materials. The Snake Charmers aren' t a pretentious act, but their album cover a listenable and pleasent songs, with some really nice tunes.

Labels: THE SNAKE CHARMERS - Been Down Too Long

Thank you so much for the review and your kind words.

It is very exciting for a little band from Texas to be reviewed in Serbia! What a wonderful thing it is to be able to reach across the world this way.

Best regards from The Snake Charmers