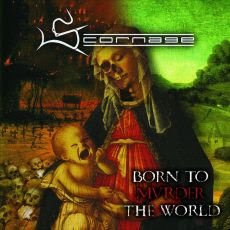 Written by Branimir Lokner
Wednesday, 06 May 2009

German Scornage is well-known act on nowadays underground metal therithory. They were formed in 1998 , and its carrear was slowly growing through past years. They had also a 3 European tours, and supported more or less many well-known acts from Terror Squad to Crowbar.
"Born To Murder The Word" is its actuelle issue released in February this year for "Remedy Records". A band has introduced themselves with 10 mainly equalizing tracks done in faster to faster-up tempo. A production is also done in similiar manner, where one identical realizations
exsists from first to last track. On the other hand, Scornage has showed that its performing capabilities clearly defines them as a modern thrash act. A screamo vocalizations and technically not perfect, but coherent performings characterize also atmosphere on album in general. A second song from album "Prototype", in my opinion could be favourable one.