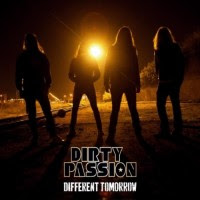 DIRTY PASSION - Different Tomorrow
Written by Branimir Lokner
Sunday, 17 July 2011
DIRTY PASSION
" Different Tomorrow"
( Denomination Records ) 2010.
CD - SWEDEN
Hard rock/melodic hard rock
Dirty Passion are band coming out of Sweden. They were formed in 2006 year, and they are four piece act faithfull to hard rock tendencies.
" Different Tomorrow" is their debut from previous 2010 year, released for " Denomination Records". A quartet supported some well -known bands as a Saxon, Faster Pussycat and Enuff Z' nuff, to name a few. They have a brilliant vocalist - Emil Ekbladh in its line-up, and generally they introduced to the audience as a melodic hard rock act inspired by the 80's and late 70's movement and groups as well. A songs are done mainly in mid-up tempo, a certain and convinceble vocalization characterize a songs structure, as same as distant band playings in the back. " Different Tomorrow" are consists of equalizing materials, without any typical or leading song, but with materials acceptable for radio usings. This is a promising debut of Sweden fellows, probably more interesting for 80's hard rock fans...
Rating : 7 / 10
C / o : www.dirtypassion.net
Posted by Branimir Lokner at 2:18 AM