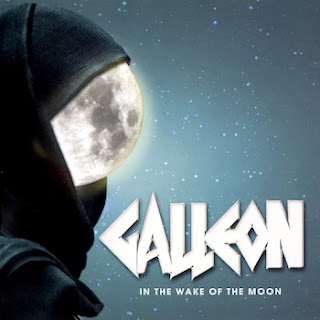 GALLEON - In The Wake Of The Moon
Written by Branimir Lokner
Tuesday, 26 July 2011
GALLEON
" In The Wake Of The Moon "
( Aerodynamic Records ) 2010.
CD - SWEDEN
Progressive/symphonic rock
Galleon isn' t a newer progressive act, coming out from Sweden. They are active since 1985, and first album they have released in 1993 year, entitled " Lynx". A Swedish fellows works as a quartet, and during the years, they have toured around Europe, and released with actuelle one beleive or not, a 9 albums. Galleon are progressive /symphonic rock band, whose orientatoin captures many original detalis and elements, especially in arrangments threathenings.A songs are complexive, done in mid, rarely mid-up tempo.
Some influences coming out from 80's and 70's period, especially from British groups as a IQ, Pallas, Twelfth Night, Genesis and Camel, but Galleon is mainly original act, whose precise and distant playing, as same as colourful authors creations, reflects also a huge experionce of all members from band. " In The Wake Of The Moon" are consists of many inspirative places, and deserve repeatable listenings. I have to add that promotional activities of band's actuelle album in the net are also respectabile, and many webzines and sites have informed about their actuelle product. " In The Wake Of The Moon" is a recomandable album of Swedish band, equally interesting for older and newer progressive followers.
Rating : 8 , 5 / 10
C / o : www.aerodynamicrecords.com
Posted by Branimir Lokner at 4:18 PM