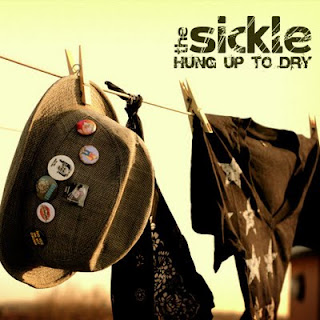 THE SICKLE - Hung Up To Dry
Written by Branimir Lokner
Thursday, 21 July 2011
THE SICKLE
" Hung Up To Dry "
(Secondo Avento Records/New Model Label) 2011.
CD
Power pop / melodic punk rock - ITALY
The Sickle are relatively newer "kids" in international music arena, and generally a fresh act coming out from Italy. They are trio, and " Hung Up To Dry" is actuelle debut, with 12 tracks in. As a press material announce, Italian fellows are on the field of several performing forms, with strong punk traces and meloding includings as well. Preciselly, I would ratherly separete their evident strong power pop dimension with also evident punk rrock elements. A both genre's forms exsists in its offering, but in unclassical way or in unclassical standardizations. But, that wasn' t a problem at all, or problem for band's members. The Sickle offers a strong melodicity, clear in every corner of each song, and punk rock energy, as same as punk rock " motorization" too. I wouldn't compare Italians, as the case was with some of my foreighn collegues, with any of well-known acts, Californian, or Europian, and The Sickle are mainly an original act, with clear authors views. The last 2 songs were done in accoustical mood, and in some way are different than others. But, " Humg Up To Dry" is pretty optimistic album, without a weacker places, and this is a pretty good discographical start for Italian youngsters....
Rating : 7, 5 / 10
C / o : www.thesickle.eu
e-mail : lorynml@gmail.com
Posted by Branimir Lokner at 10:49 PM

Thank you so much!