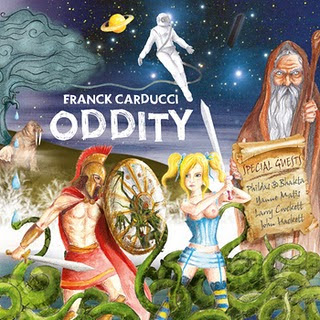 FRANCK CARDUCCI - Oddity
Written by Branimir Lokner
Tuesday, 02 August 2011
FRANCK CARDUCCI
" Oddity "
( Vocation Records ) 2011.
CD
Progressive rock - FRANCE
Multi-instrumentalist and composer, Franck Carducci is a musician with huge experience.During the years he cooperated with many groups, and rumours says that he was playing in 20 to 30 different bands, and was involved to recording beleive or not about 15 different albums.
" Oddity" is a solo project, released with respectable team of proffesionals. It is a sort of concept album, based on well-known Greek mithology. Musically, Franck and his colaboraters has offered a sort of classic progressive variants, influental by the 70s and 80's progressive movements as well. So, we can find here and there some clear Genesis musical traces, and Franck also has citied legacy of mentioned band, included on album song " The Carpet Crawlers". We can also hear touches of Camel or Pendragon works, but " Oddity" is a complexive and also very listenable product. A production has captured a standards of our time, and it's importsant to say, that all other technical elements funkcionizes according to plans. A fine album, probably also enjouable for prog fans...
Rating : 7, 5 / 10
C / o : www.franckcarducci.com
Posted by Branimir Lokner at 2:06 AM