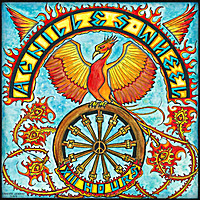 Achilles Wheel is a relatively new band, fronted by 2 persons/authors - Paul Kamm
and Johnny " Mojo" Flores.  The 13 songs from its debut album were recorded in
precisely 13 hours, live at historical " Nevada Theater", in downtown Nevada City,
CA. In best possible way USA act combines jam rock options with roots music
legacies. Their performing variants also apsorbes a psychology of 70's period, and
some influences leads to the groups as a Alman Brothers, Grateful Dead, and Little
Feat among others. But, even that band introduces themselves as a act with
raw and in the same time convinceble performing energy, its songs are more
than so call standard jam rock  tunes/themes. " 13 Hours" on the other hand are
consists of equalizing materials, with positive,  pleasent and also enjoyable
atmosphere, without less interesting moments. Fine work and recomandable
peace of music too...