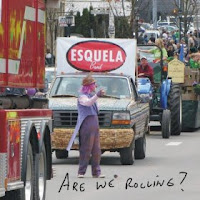 A New York based band Esquela is a relatively newer act, under the indie roots/americana
therithory. Firstly, they have discographicaly started with " The Owl Has Landed" album,
and a few months ago, they are hailing with actuelle product, a CD entitled
" Are We Rolling?". And, a simply answer is - yes. Esquela in best possible way communicate
with rock/americana/country rock/roots music variants, and also with 70's flavours and
additionals as well. A soulful voice of singer Rebecca Frame characterize an atmosphere
in its songs , penned mostly by bass player Chico Finn. In many aspects a 6 piece Newyorkers
reminds on known 70's acts, but  psychologically they also elegantly captures a standars of
our time. " Are We Rolling?" are consists of mainly equalizing materials, and one " classic"-
- " Tossin' And Turnin' "