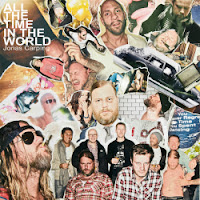 "All The Time In The World"
(self - released/Hemifran) 2012.
CD
Alter folk/americana - SWEDEN


Out of Sweden comes a Jonas Carping, singer/songwriter who pleasently suprised worldwide audience with his debut release " All The Time In The World". He has recorded a debut CD with 10 tracks in with the following band, and complete materials were done in americana/folk/alter folk mood, with evident 70's pastiche as well. Jonas is a certain singer , with powerful and intense voice. His songs are melodic, absolute atmospheric, with so call " dark" intensions and the same present mood. He knows to associate on late Leonard Cohen, also on some Roy Orbinson works, but a mentioned specific atmosphere is a his key weapon. A complete materials except one track, where he is a co-author, describes him as a certain and convinceble composer. His album is a specally recomand for the night-time listening. All the technical things, as same as production satisfies too...