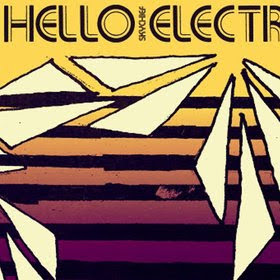 HELLO ELECTRIC - Skychief
Written by Branimir Lokner
Tuesday, 26 April 2011
HELLO ELECTRIC
" Skychief "
( Spaceman ) 2010.
CD - USA
Post rock/psychedelic
A trio from Portland, OR, started out its life in 2005 year, founded by Kirk Ohnstad. Other members are Zack Bendt and Henry Gibson.
Their first discographical step was an " Pilot EP " from 2008 year. Actuelle full-length " Skychief" a band has released duing the previous 2010 year.
Hello Electric are one of those groups whose orientation is hard to describe. They are practically original act, with complexive performing views, and similiar realization. A songs/themes from album are different among them. A band accepts a post rock ideas, and psychedelic includings in performing variants. Most of the songs posses dreamy atmosphere in one part, and in the contrary, noise includings are also present in same themes. In some places methods of vocalizations dominates through arrangments views, in other playing noise characterize songs structures. " Skychief" is an interesting challenge, not only for the potential listeners population, and deserve a specific attention and concetration as well.
Rating : 7 / 10
C / o : www.helloelectrick.com
www.myspace.com/spaceflight127
Posted by Branimir Lokner at 9:37 PM