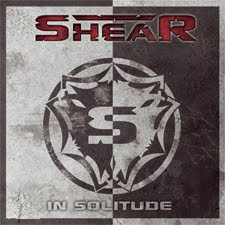 SHEAR - In Solitude
Written by Branimir Lokner
Monday, 25 April 2011
SHEAR
" In Solitude "
( Self - released ) 2010.
EP CD - FINLAND
Melodic/power/symphonic metal
Shear is Helsinki, Finland based band, formed back in 2008 year. But complete line-up are consists of well-experienced musicians, cos' the members of Shear have played in many familiar bands, such as : Amoral, Omnium Gatherium, Imperainon, Elemium and Crystal Blaze.
Shear is also a female fronted a six piece band, and its first discographical arrival was an EP
from 2010 year, entitlled " In Solitude".
They have introduced with 4 mainly equalizing tracks, and complete materials were done with excellent productional work.A group is on therithory of pretty melodic metal, fulfield with power and symphonic traces as well. A group has also received a good response from several webzines and magazines abroad, and that's no doubt that their musiacal approach deserve recomandations. Complete present materials posses a similiar qualities, and songs are listenable, and in the same time enjouable, if you are fan of melodic metal tendencies. Nice work, and we'll see what the future brings for Finnish metallers...
Rating : 8 / 10
C / o : www.shearofficial.com
www.myspace.com/shearofficial
Posted by Branimir Lokner at 8:47 PM