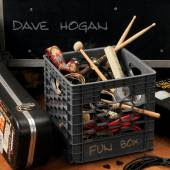 DAVE HOGAN - Fun Box
Written by Branimir Lokner
Wednesday, 23 November 2011
DAVE HOGAN
" Fun Box "
( Self - released ) 2011.
CD - USA
Americana/alt. country/rock
A Bridgeport, Connecticut based songwriter, guitarist and vocalist, Dave Hogan is a veteran of three critically-acclaimed groups, as a : Red One, The Great Upsetters, and The Rafter Bats. He is a longest period in a saddle, and his carrear deserve respectations. He was colaborated and cooperate with numerous collegues and musicians, and began his solo career in 2006 year. " Fun Box" is his actuelle product, and this is a full-length Digi CD with 10 tracks in. Dave's musical styles ranges from americana and alt.country tendencies, to 70's rock and acoustic includings, and some additional elements in between, as well. His vocal interpretation posses a fresh energy, some very personal enthusiastic view, and what is also important to say, all of 10 present songs are listenable and acceptable for tasty and also " avarage" listener's ear. In some aspects his works reminds me on late James Taylor approach, but Dave as a songwriter has showed enough own " tricks" and repeatable melodies /details. " Fun Box" as a album satisfies in every aspects, and also is recomandable for old scholl and 70's music followers.
Rating : 8 / 10
C / o : www.davehoganmusic.com
Posted by Branimir Lokner at 9:04 AM