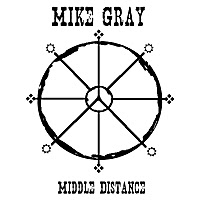 MIKE GRAY - Middle Distance
Written by Branimir Lokner
Sunday, 27 November 2011
MIKE GRAY
" Middle Distance "
( Self - released ) 2011.
CD - USA
Blues/roots music
Hailing from the Bootheel of Missouri, guitarist, vocalist and composer, Mike Gray having made music for two decades. He is musician with respectable experience behind, but also a relatively newer name on blues / roots fields. Discographically he debuted with " Middle Distance" album, from this 2011 year, and this is a CD ( also available in digital form ) , with 13 tracks in. Most of the things, Mike did with own " hands" and forces, and he has introduced himself as a blues performer, with strong country, and roots elements presents in his views as well. We can also find some boogie traces, some up tempo honky-tonk variants, but mentioned reckognizable style is present on materials form album. A similiar " psyhology", circulate around complete album materials, and Mike also treats arrangments in simple but clear way. Production isn' t modern, but in the other hand posses supportive and connective details , generally for Mike's sound. Finally, " Middle Distance" is a good discographical start for forthcoming Mike's carrear....
Rating : 7 / 10
www.mikegrayonline.com
Posted by Branimir Lokner at 4:01 PM