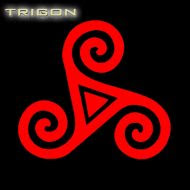 TRIGON - 2011
Written by Branimir Lokner
Wednesday, 02 November 2011
TRIGON
" 2011 "
( Trigon Music ) 2011.
CD - GERMANY
Fusion/jazz-rock/progressive
Trigon are instrumental trio from Karlsruhe, whose activities dated from the late 80's. A line-up are consists of well-experienced musicians, and respectable instrumentalists, brothers Rainer ( guitar ) and Stefan ( bass ) Lange, and drummer Rudi Metzler. Actuelle " 2011 " CD is a first product since " The Zappanale" DVD from 2007 year. The CD features 13 tracks and 67 minutes of music, and this is a sort of retrospective item, with 11 older, but freshly rearranged, restored and remixed tracks , and 2 new numbers. Musically, we can describe Trigon as a powerful instrumental act, whose oriantations touches elements of 70's jazz-rock music, progressive details, as same as some hidden psychedelic variants as well.
A group also captures a " energy" of our time, and all of present tracks are full of constant uptempo changes, and " vibrant" but colourfull arrangments works. In the other hand, " 2011" is also a listenable album, without boring or less interesting moments. Most of present themes also posses some eastern flavours, and repeatable performing " themes", and finally members from band very wisely has accepted a standards of our time. What is more important, under the mentioned genre's forms, Trigon are modern and pretty convinceble band...
Rating : 8, 5 / 10
C / o : www.Trigon.in
Posted by Branimir Lokner at 1:41 PM