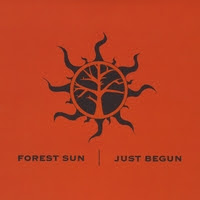 San Francisco based road warrior and singer/songwriter Forest Sun is constantly active on national indie / americana scene.
He has also toured in Europe, and his concert experience is undoubtelly huge. " Just Began" is his actuelle album with 12 tracks in, done in alt.country/folkie/ roots/americana mood. He is certain and pleasent singer, and most of present songs are done in slower mid tempo, without unexpecting rhythm changes. Even of solid performings and technically well realazing job, most of the materials suffers of manniristical problems. Everything is more or less recognazible , and even of quiet good productional work, missings of performing energy, characterized practically each track from album. " Just Began " simply isn' t a better album realesed from Forest Sun kitchen.

Posted by Branimir Lokner at 7:04 PM