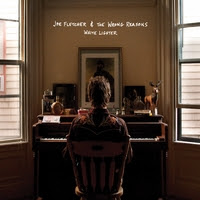 Out of Providence, Rhode Island comes a singer / songwriter Joe Fletcher and his Wrong Reasons band. Fletcher is a old-fashioned troubadour and musician, whose carrear is continiously active a several years. He has received a respectabile recognitions and critics with his first album from 2007 year, entitled  " Bury Your Problems ". A few times with his group he toured around state and at the end of 2010 year, he has released a second and still actuelle album - " White Lighter". He sing about bad luck, wrong decisions, hard living and bad times, but musically, he and his band deliver a strong country rock sound, with many honky-tonk and rocking and rolling includings, with additionals of some so call old school flavours as well. " With Lighter" is a CD with mainly equalizing materials, generally positive atmosphere,  and some pretty repeatable songs.

Posted by Branimir Lokner at 1:13 PM