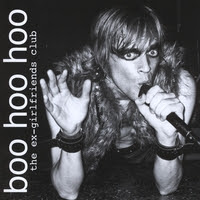 Out of Portland, Oregon comes a new " sensation ",  if we speak about garage rock / garage punk tendencies. They are quartet and musically band whose interesting spheres leads to older variants, preciselly  to late 70's era. They are pretty convinceble in its attitudes, as same as in performing capabilities, and fans of Stooges, New York Dolls, Sonics legacies, can find many similiar views in music of Portland fellows.  Yes, The Ex-Girlfriends Club looks and sound as a act from the 70's, and  all of 9 of present songs from its album, confirms mentioned opinion. In the other hand, Oregon quartet are consist of certain players and they teamed up pretty serious, and strongest as hell. I suppose that visual part is also important detail, with realistical presentation on stage and concert forms. " Boo Hoo Hoo" are consists of equalizing materials, done in mentioned 70's manner, but with clear message and certain playings...

Posted by Branimir Lokner at 8:20 AM