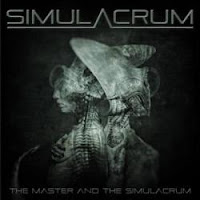 Out of Turku, Finland comes a band Simulacrum, a new national hope if we speak about progressive metal tendencies.
The beginings of group started out in their highschool days, but more seriously things are turn around a few  years ago. " The Master And The Simulacrum "is actuelle debut, where we can find a 8 seriously done tracks. A group works as a quintet, where keybords threathenings and includings are important part of general performing and authors realizations. In one hand, musically they are faithful to the legacies of 90's progressive metal movement, but also is evident that influences from the 70's progressive era, aren' t strange in its views. This is undoubtly an interesting mixture, and practically most of the present tracks " suffer" of mentioned " infections". A production satisfie in every manner, and generally band has offered a promising debut.

Posted by Branimir Lokner at 8:58 AM