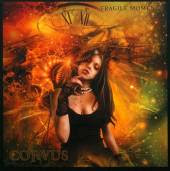 A Glendale, Arizona based band Corvus, started out its carreare in 2006 year. A group was formed by frontman/singer/songwriter Brock Brown during the 2006 year. Even of some personal changes, Corvus is discographically active act, and during the forthcoming period, with actuelle one, a band has released a 3 albums : " We All Fall Down", " An Affair With Tragedy" and " Fragile Moments".
A band works in quintet formation,and its music can be labeled as a a sort of progressive / alter metal. A pretty unique sound characterize its offering, as same as under the mentioned genres tendencies - moderm views.A songs are done in faster / fuster up tempo, where thrashing riffs and melodic vocalizations dominates through complete materials. A band has also offered an interesting design of its CD covers, and I have to add that other technical elements also satisfies. Corvus are undoubtly a band with original approach, and their albums deserves lesteners attention.

I absolutely love this band, and this album. This is one of my favorite albums of all time. I like their newest one The Comfort of Home just as much. Their music style isn't like most bands I have come across. Honestly I have looked for bands like them, but I have not really find any one band that sounds like them. That is a good thing though. Originality.