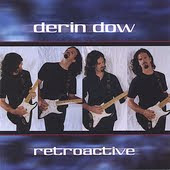 Derin Dow is Los Angeles based musician, songwriter and guitar player ( on his album he also played bass ), active from late 80's period.
During the 90's period, he began contributing to the musical scores of several independent films, and he has also been feaatured in "RECORDING" magazine on two occasions. Since 2005, Derin and his band have opened shows for artists as a : Asia, Shaw - Blades , Ambrosia...
Derin is a strong songwriter and fine vocalist. His interesting sphere are deeply in melodic rock / AOR / classic rock fields, and most of his songs posses late 70's and early 80's approach. In some aspects his musical legacy knows to remind on REO Speedwagon or Foreigner style, but he is enough convinceble in his performing attitudes. All of 13 present songs on " Retroactive" album posses radio friendly usings, and also are pretty attractive for concerts playings. Under the mentioned genre's tendencies " Retroactive" is more than interesting and acceptable album.

Thank you sir. I appreciate the review. I am currently working on another album as well. Hope to get it out sometime later this year.