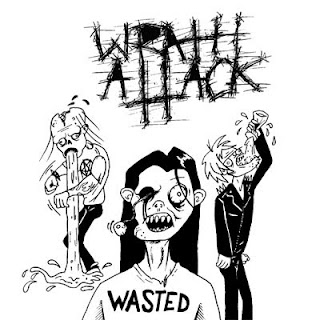 
Wrath Attack are Norway act, faithfull to old school thrash metal tendencies. They have founded in late 2007 year, and till now recorded a 2 Demos, firstly 2-track " Bringing Out Of Thrash" ( 2008. ), and actuelle one " Wasted". 2 persons are practically did a complete jobs - Jan ( vocals, guitars, bass ) and Martin - drums. Author of 4 tracks ( 1 is cover ) was Jan., and what we can find here on complete 5 tracks and about 17 minutes of music, is 80's variants of thrash metal equally done in performing and psychological way.. Underground tendencies are also present in complete iconography, as same as garage variants. Nothing special, but at the same time pretty optimistic, Wrath Attack bringing back the period of 80's, and its message is mainly acceptable for the followers of old school thrash variants.