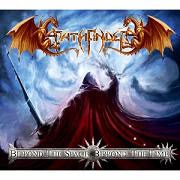 
Pathfinder are hailing from Poland, a country also known as a destination of many interesting newer death and black metal groups, and during the August this year, they have released actuelle album, entitled " Beyond The Space, Beyond The Time". A Polish fellows works in sextet formation, and judging by genres options, they are faithfull to symphonoc / power metal tendencies. They introduced themselves as a power/symphonic metal act of older school, or better to say as a group whose orientation is nearer to classic genres tendencies. So, some traces could lead to established acts as a Rhapsody, Kamelot or Blind Guardian, and more or less originality isn' t a Pathfinders middle name.
But, in the other hand, their performing realizations is simply convinceble. Production is also modern and all other thechnical elements are pretty recomandable, among others a brilliant cover artwork with 12 page booklet confrms a groups seriousnes and professionalism.
A pretty equalizing materials characterize album in general, and there's no doubt that power/symphonic metal freaks will find many interesting moments in Pathfinder's offering.