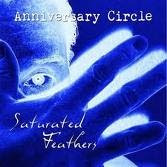 ANNIVERSARY CIRCLE - Saturated Feathers
Written by Branimir Lokner
Friday, 11 February 2011
ANNIVERSARY CIRCLE
" Saturated Feathers "
( Sun & Moon Records ) 2010.
CD - UK
Goth/darkwave/post new wave
Anniversary Circle are newer act on scene, whose musical interests touches goth and darkwave tendencies. A group are consists of two persons : Estelliane Kermagoret - vocals, and Martin Johnson, who is responsible for all instruments, vocals, authors works and production. They are hailing from UK, and few months ago they have released a debut album, entitled " Saturated Feathers". Anniversary Circle has offered a very interesting works, with many releasing influences. Basically, they are faithfull to goth/darkwave options, and specially to 80's legacies.
In many aspects, they knows to remind on earliest 80's acts, as a Fields Of Nephilim, Living In Texas, Bauhaus, Coctau Twins and other " 4 AD " performers, but present songs also announced that Johnson as a author posses a unique viiews too. A songs are also different among them, and it's also important to say, that Anniversary Circle did a lotta' efforts in arrangments realizations. A specific and unique atmosphere also characterize offering materials, and I would mention a 5th tune - " Take" as a primary example. " Saturated Feathers" as a album, discover many interesting places, and satisfies in general...
Rating : 8, 5 / 10
C / o : www.anniversarycircle.com
www.myspace.com/anniversarycircle
Posted by Branimir Lokner at 6:19 PM

Thanks for your excellent review!