ELIS CASADO - Crab In The Lamp 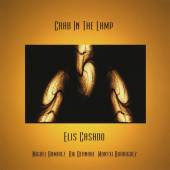 ELIS CASADO - Crab In The Lamp
Written by Branimir Lokner
Sunday, 20 February 2011
ELIS CASADO
" Crab In The Lamp "
( Sile ) 2010.
CD - SPAIN
Jazz/fusion/funk/instrumental
" Crab In The Lamp" is a newer offering of keyborder Elis Casado, a musician from Bilbao, Basque Country, Spain. I had an oportunitty to review his previous album, so I already know what to expect. With cooperation of 3 musicians, Elis continiously follow his approach. So, in 7 present instrumental tracks, where 5 are authors creations and two of them are covers - " Enter The Dragon Theme" ( Lalo Schifrin ) and " Interplay ( Bill Evans ), Elis and his comrades delivers enough portions of jazzy instrumental works, locate somwhere in the 50's and 60's period from previous century. Hammond organ is a leading instrument, and groovy tendencies as same as funk and fusion elements dominates through present songs. A pleasent and enjouble atmosphere characterize album in general, and one more time, Elis certainly knows how to satisfy a listener's taste. Normally, if you are a fan of mentioned genre's forms. "Crab In The Lamp" is another fine album of Spanish keyborder and composer, acceptable not only for jazz, groovy and funk followers....
Rating : 8 , 5 / 10
C / o : www.eliscasado.com
Posted by Branimir Lokner at 9:34 PM