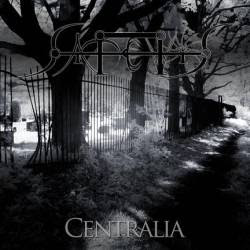 SATEVIS - Centralia
Written by Branimir Lokner
Friday, 11 February 2011
SATEVIS
" Centralia "
( Self - released ) 2010.
EP CD
Black / death metal - USA
Out of New Yoirk comes a band Satevis. A members from group started out its life in 2003 year, and twice time during entire carreare changed a name. Also its music has been changed through times, and actuelle EP " Centralia" captured them as a band whose musical direction is faithfull to black / death metal variants. Satevis has introduced themselves with 5 tracks in, done in symphonic black/death vein. A songs are intense, structually expandier with presents of some hidden melodic lines. Lyrically thay are on therithory of universal black themes, as a evil,disaster, weirdness, but musically mostly accepts influences from 90's period as well. In the other hand, judging by performing realizations, they also sounds as a group with so call modern look. An opening track from band's EP " Endless Perdition", is to my opinion a favourable one ....
Rating: 7 / 10
C / o : www.facebook.com/satevismusic
e-mail : satevismusic@gmail.com
Posted by Branimir Lokner at 10:42 AM