INNER AXIS - Into The Storm 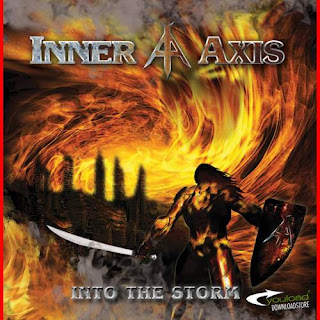 INNER AXIS - Into The Storm
Written by Branimir Lokner
Wednesday, 25 May 2011
INNER AXIS
" Into The Storm "
( Coast Rock Records ) 2011.
CD
Heavy/power metal - GERMANY
Inner Axis are newer German act, formed back in 2008 year by five " ready for action " members. They are deeply into heavy/power tendencies, mainly faithful to so call older school and older variants. Their actuelle debut from January this 2011 year - " Into The Storm " defines and proves, that band through 8 songs manniristically successful combine a strong riffs, distant and convinceble, but also agressive playings with melodic vocal includings as well. They knows to remind on well-known groups from 80's and 90's period, but also as a band shows some original authors views. A production is maybe not modern, but relevantly follows up a group's musical wantings. All of 8 present songs were done with precise and expandier arrangments includings, and in every place of album a Germans has introduced themselves as a serious act.
Quite enough for fine discographical start, and recomandable for mainly old school followers of heavy/power variants...
Rating : 7 , 5 / 10
C / o : www.inneraxis.de
www.myspace.com/inneraxis
Posted by Branimir Lokner at 11:20 PM