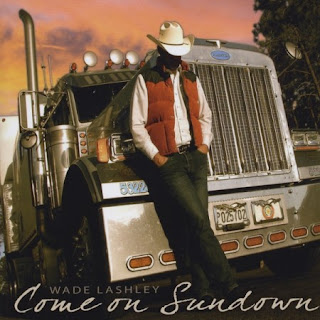 WADE LASHLEY - Come On Sundown
Written by Branimir Lokner
Monday, 23 May 2011
WADE LASHLEY
" Come On Sundown "
( Self - released ) 2010.
CD - USA
Country/roots music/americana
Wade Lashley is a musician with respectable experience behind , and he is a longest period in the saddle. He is a songwriter, but also he use to sing a Johnny Cash, Bob Dylan, Lucinda Williams materials... During the years he has released with actuelle one a 3 albums : firstly acoustically orientired " In From The Wilderness " ( 2005 ), followed by " Someone Take The Wheel " ( 2008 ), and " Come On Sundown " from previous 2010 year. Wade is certain singer, and his musical orientation mainly cover a classic country and roots music idions, fullfield with americana traces as well. A songs are done in mid, rarely in mid-up tempo, where present atmosphere reminds on past periods and better life too." Come On Sundown" are consists of mainly equalizing materials, with certain realizations and relevant production.
" Come On Sundown" is a recomandable product firstly for all old school country and roots music followers....
Rating : 7 , 5 / 10
C / o : www.wadelashley.com
www.myspace.com/wadelashley
Posted by Branimir Lokner at 10:04 PM