OF WRATH AND RUIN - Conquering Oblivion 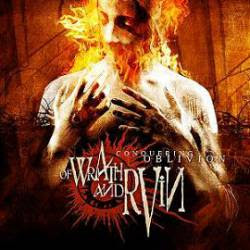 OF WRATH AND RUIN - Conquering Oblivion
Written by Branimir Lokner
Sunday, 08 May 2011
OF WRATH AND RUIN
" Conquering Oblivion "
( Apollyon Records ) 2011.
CD - USA
Power/progressive metal
USA act Of Wrath And Ruin started out in 2004 year. A group had some personal turbulations during the years, but key members Pat Brose and Joe Brannigan, finally have found the right members. " Conquering Oblivion" is a group's debut album from January this 2011 year, released for " Apollyon Records". A quartet from Gloucester, New Jersey has introduced themselves as a well-experienced and also well-trained cohesive and coherent team, whose musical orientation belongs to power and progressive matal tendencies. I would add that group equally accept power and progressive elements, and some 90's traces are also present in its music as well. We can find a 9 tracks on album, where technical performing elements dominates through songs arrangments. " Normal" and guttural vocalization changing places on present songs, and many interesting passages as same as performing tricks, USA fellows has offered here and there. Unfortunatelly, a production didn' t follow other well-done details, and mentioned element was a weacker part of complete final album's impression.
On the other hand, Of Wrath And Ruin could be interesting act for older and newer followers of power/progressive metal tendencies, cos' they have offered enough satisfying moments...
Rating : 7 , 5 / 10
C / o : www.ofwrathandruin.com
www.apollyonrecords.com
Posted by Branimir Lokner at 11:55 PM

We've recently gotten a lot of new supporters from around the world. Thank you so much for digging the band! Our album, "Conquering Oblivion" is making it's way into the hands of people from around the globe. We love that you're spreading the music, but we ask that you go the extra metal mile and support us by downloading a tune or ordering a CD, (the sound quality is way better than some second rate pirated copy :), booking us to play a sweet gig, ordering a shirt, posting your feedback, or just even telling a friend about the band. We put a lot of hard work into what we do, and by giving us a little love, support and tender care, you'll help us keep doing what we do... bring the metal. A sincere thank you for all your support.