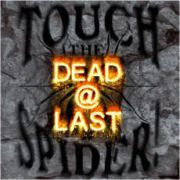 TOUCH THE SPIDER - Dead @ Last
Written by Branimir Lokner
Sunday, 08 May 2011
TOUCH THE SPIDER
" Dead @ Last "
( Whereareyoufrom Records ) 2011.
CD - GERMANY
Doom/goth/darkwave/psychedelic/post new wave
A two frantic Germans- Unholy Ghost and Cosmic Energy are in the saddle again. They have a new album, entitled " Dead @ Last", and this is a forth product, released for last 2 years. A mentioned Germans constantly analyze a darker side of life, and actuelle album stay on same lavel, like the case was with previous CD's. But, it seems that weird atmosphere, more monotonous and doomy passages, as same as more psychedelic soundscapes are strongerly has supported in performing and authors variants, and its evident practically from first to the last segment of the album. A songs are maybe more cohesive, but on the other hand, experimental elements are less presents in actullle album materials. But, that was a choice of mentioned tandem. Anyway, judging by band's decision, " Dead @ Last" is evidentallly different album than previous three, even that band didn' t change basic concept and similiar final message....
Rating : 7 , 5 / 10
C / o : www.touchthespider.com
www.myspace.com/touchthespider
Posted by Branimir Lokner at 11:54 PM