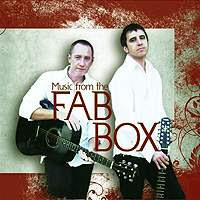 Fab Box are consists of two persons - Fabrizio Ugolini, who was formerly member of the Italian 80's hard rock act Revenge,and Massimo Bozzi, whose carrear as a producer, arranger and musician is more than respectable. As a musicians with huge experience behind, they decided to start writing own songs. So, as a result, we have here its actuelle offering, entitled " Music From The Fab Box". Italian fellows are on the field of AOR/melodic rock, with some west coast includings. Its songs also posses a clear pop pastiche and strong melodic level. There are 13 mostly equalizing tracks on album, productionally satisfying, where technical realizations deserves only a recomandations. Songs are mostly done in mid to mid -up tempo, and I would add that present materials aren' t band's answer on nowadays genre's tendencies. They choose to record own vision of AOR music, and there's no doubt that they have offered an original views. I have to say that listening a Fab Box songs, comes to mind that one thing is simply missing - and this is energy.
All other things Italians did with a similiar convinceble realization, and surelly technical perfection.