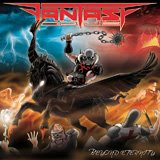 In last few years, I haven' t enough oportunity to listen a materials of some Portugal metal groups . So, Fantasy Opus and their actuelle offering will be the first reviewing album in a years, if we speak about the groups/artists from mentioned country. So, as we can see, a Portugese fellows had a some not just a "shortened" history behind, cos' their story started out in 1999 year. But, their actuelle album, is its first full-length too. Fantasy Opus are on therithory of European style of heavy/power metal, established in late 80's and the begining of the 90's period. Their songs also posses strong melodic level and some hidden progressive parts too. Technically, they did a quite solid job, maybe with more releasing additional unimportant manniristical elements.
But, a members from band also did a lotta efforts that all things funkcionizes as well. They are also a very prominent instrumentalists, and they played songs in good technical manner. I also didn' t hear too much originalities in its offering opus, but on the other hand they introduced themselves as a convinceble act in the field of heavy/power metal, and also recomandable for the followers of mentioned genre's forms.