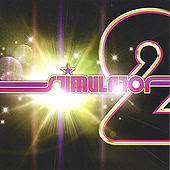 Stimulator is a L.A. based band fronted by well-known Susan Hyatt. Her collaborators and partners in crime with equal duties are drummer Chad Stewart, and bassist Sean Tichenor, both with respectable previous experience. "Stimulator 2" is a group's second effort, released on its own label, but as a informations confirmed, album is also out now on "Genepool/Universal Records" . A hittish orientations and pretentious belongs to band's wishes, so we'll see what the future brings, but judging by musical offerings, Stimulator are on therithory of 80's pop/power pop. Maybe more psychologically, but realizations of present materials and productional work also confirms mentioned statement. One tipical "summer" atmosphere circulate through present songs, and I would add that technically a band did a god job. On the other hand, a band didn' t show a same quality in every aspects of offering materials, and some of present songs are simply better than others. A band successfully covered Neil Sadaka''s tune "Love Will Keep Us Together", and mentioned song is in my opinion a best album track too.