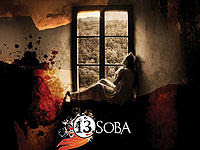 Out of Bosnian small town Gorazde comes a band Zona Iskljuchenja. Their activities dated back
from the 90's period, and members from band posses some previous experiences. "13. Soba" is its second discographical effort, and well-known Sarajevo based label "Hayat Production", was released album during the 2008 year. As a band Zona Iskljuchenja covers rock idioms, and basically they are rock group. But, they aren' t a classical rock band, and in its performing realizations we can find another additional elements as a pop includings, ethno views, but also in some segments, they have sounded as a hard rock act. But, basic element in its concept belong to lyrical approaches.Their lirical messages are oftenly pretentious, maybe too serious, also evident in cases when band sing about "normal" emotional relationships. But, that was a their choice, and what is more important, its general attitude. As a title announce, "13. Soba" are consists of 13 songs, whose technical realization mostly satisfies, but unfortunatelly, that wasn' t a case with its final message. I have to recomand a band's version of well-known song"Emina" ( traditional/A. Santic lyrics ), which realizations brings a newer specific atmosphere. But that wasn' t enough at all for final opinion.