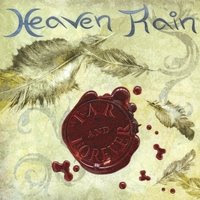 A Banjaluka based band Heaven Rain, should be a newer hope on not only national/regional
metal scene. They works as a quintet, where members from band has had a previous experiences. During the 2008 year, they have recorded a debut issue, entitled "Far And Forever", and mentioned album mostly pleased a worldwide reviewers. Basically, Heaven Rain communicate with pretty melodic forms of metal, fulfield with clear power and progressive metal tendencies as well. Judging by technical knowledges, all members from band has showed a respectable performing qualities, and its sound as same as arrangments threathenings, were leading by keybord drivin' motorizations. There are 9 tracks on album, and judging by performing as same as technical realizations, a band has accepted a standards of our time.
We can hear also a hidden AOR traces in its approach, but generally, a group has offered a colourful and convinceble works. "Far And Forever" is a promising debut of Banjaluka mates, and certainly deserved attention of genre's followers.