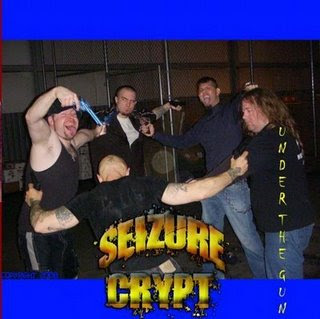 Sezure Crypt are New York City horde, active continiously some period on underground circuit. "Under The Gun" is their actuelle offering from previous year, and before mentioned one, a band was recorded a 2 more issues. Seizure Crypt directly and without compromises shows its capabilities. They hits you right in a face, and its songs speaks about reality. A group is musically so far of any trendy elements, and its views posses enough original segments.
A band combines elements of thrashcore, hardcore and grindcore, and some other things in - between. But, more important is their positive psychology and general positive attitude. Its song also has an unbeleiveble energy, and there's no doubt that special parts of its approach are concerts and contacts with crowds. " Under The Gun" is an album with little more than 21 minutes of unorganized brutality, but with present ideas they have a certain future.

Labels: SEIZURE CRYPT - Under The Gun