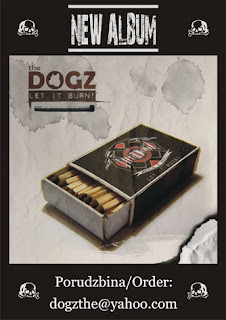 A Sremska Kamenica/Novi Sad based band The Dogs a some months ago has released actuelle full-length, entitled " Let It Burn!". The Dogz, formerly Mighty Dogz are active on local/national garage scene last few years, and they are well-known to followers of domestic garage tendencies.
A new album brings some different tendencies, if we can compare with its previous recordings. They are still faithfull to garage rock/garage punk options, but maybe more with some so call "normal" rock additionals as well. A productional work of band's old friend and collaborator Comandant Adam ( preciselly he did production with members from band ) in his well-known
studio is maybe "softier" than potential follower could expect, but finally that was a group's decision. A songs are done in faster, to little more faster-up tempo, in same manner, and in some motorization. A band has offered own materials, whose members has given a strong effort in each tacts of present songs. A new Dogz album is little less distinctive than its previous recordings, but without doubt, they steped out in wanting therithory.

Labels: THE DOGZ - Let It Burn