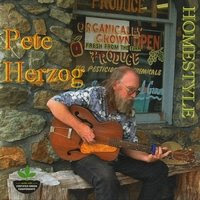 Out of Trail, Oregon comes a guitarist/songwriter/troubadour - Pete Herzog.His carrear is mostly unknown, but there's no doubt that his performing style and general musical background, posses evident experience. During the years, he has performed solo, as same as with the bands, but one day, he decided that best solution for him is to perform alone with his instrument. He is faithfull to blues and roots music, even that most of his materials he has penned as a author. Pete uses bootleneck technique, but in my opinion a key element of his performing capabilities lays in specific vocalization, full of atmospheric and mood changes.So, as a result we can oportunitty to hear, that each song from album has sounded specifically, and different among them, judging by various emotional statements. "Homestyle" are consists of 18 themes, where three of them are traditional covers.
Most of listeners will surelly accept Pete's version of song "House Of The Rising Sun". As a album, "Homestyle" is full of pleasent moments, unexpecting atmospheres, and without any weacker places.