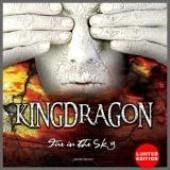 A Greek web pages are full of informations/reviews about Kingdragon band last months. A key reason could be that band is fronted by veteran of national metal scene, keyborder and vocalist - George Aspiotis, well-known not only on domestic field. Kingdragon's first discographical effort is
EP with 4 tracks in, entitled simply "Fire In The Sky". A band has introduced themselves with 4 coherent tracks, nearer to psychology of 80's/90's melodic rock/melodic hard rock, and also close to legacy of American heroes from the past - Foreighner, Survivor, Toto... A productional work is professionally done, and all things get funkcionized as well. But, maybe too maniristically to my taste. It's probably the only real exsisting problem, evident on its EP issue. A Greek mates has offered enough certain and expecting moments, but with very few present elements of originality. In spite of that, "Fire In The Sky" posses other details, whose valuabilities could be pleased a followers of melodic rock/AOR tendencies.

Labels: Kingdragon - Fire In The Sky