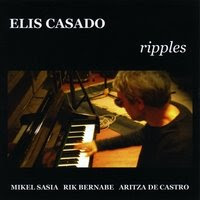 Out of Bilbao, Basque Country comes a keyborder, piano player and composer Elis Casado. He is well-experienced musician, and his first musical steps he did at his youth age. A first lessons received from his father, but during the years he has included himself in many projects/groups
and recordings. With his following band, comprise of 3 adding musicians, as a : guitarist Mikel Sasia, basist Rik Barnabe and drummer Aritza De Castro during the end of September, he has released an album materials, consists of 6 instrumental themes, entitled "Ripples".
With his colaborators, Elis has offered a fine portion of instrumental themes, balancing between classic jazz, fusion and groovy tendencies.
Elis has also drawed elements of 50's jazzy approach, where many aduts has given to some sort of so call atmospheric threathenings of present themes. There's no doubt, that we can find here and there refine work of Elis and his friends, and surelly his authors offering is absolute recomandable.