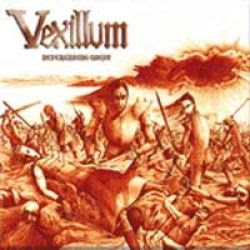 A few days ago, I have received a Demo EP from Italian act Vexillum, active on domestick scene from 2004 year. They were formed by 2 guys, Luca "Akira" Torelli and Michele Gasparri. Actuelle Demo issue with 4 tracks in, has followed in 2007 year, and band received a many mostly positive reactions from national press/webzines. They are still unknown outside Italy, and it's also importat to say, that after a realization of EP, a band has added some new names on its line-up.
Vexillum are on the field of epic/power metal with clear heavy additionals and melodic includings.A melodicity is, like the case is with many other national acts , a band's important adut, even that I couldn' t find any weacker details in its performing offerings. But, a weacker side of offering materials lays in productional threathenings. A production is mostly maniristically threathed, with many failures in taping of rhythm section.
Many refine parts in its performings, has suffered of unquality production, and that's a reality. All of 4 tracks are judging by performing and stylish options similiar and comparabile among them. Cover artwork of its EP also deserve positive opinions and reaction, but mentioned production amortize complete view of band's debut.