AJAY MATHUR - A Matter Of Time 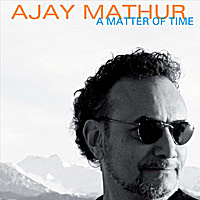 AJAY MATHUR - A  Matter Of Time

Ajay Mathur is a India born songwriter and musician. His carrear started out in cities of Delhi and Mumbai during the late 70's.
In his European country Switzerland, he was a part of group Mainstreet, and during the period of 80's and the 90's, with mentioned
band he took an important rola in national rock community. " A Matter Of Time" is a his solo album  from 2011 year, a full-length
with 15 tracks in. Ajay is a certain and emotional singer. His songs are serious, pretty melodic, with expandier arrangments
includings and strong performings. He knows to associate on artists as a George Harison, John Mayer, and Tom Petty among others,
but more in psychological and emotional forms, than as a author. He has offered also a complexive, but equalizing materials, where
most of the songs posses a radio friendly usings. " A Matter Of Time " is a album worth listeners attention, with many pleasent moments.

Posted by Branimir Lokner at 10:31 PM