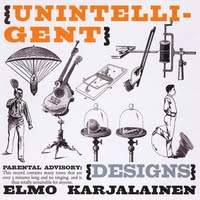 
Elmo Karjalainen is well-known guitarist out of Finland, established as a performer in a groups as a Death Like Silence and
Conquest, among others. " Uninteligent Designs" is a his solo debut from previous 2012 year, and this is a instrumental album,
with 16 tracks in. Elmo is a undoubtely guitar virtuoso, and " killer" performer and in his album he offers a variaty of technique
tricks, and mixing stylish elements. He posses a absolute control under his instrument, and his playing is frantic,
dynamic , with lotta' includings of real energy, but at the same time melodic. We can find in his tracks elements of
neo classical variants, progressive metal, jazz, fusion... He has also created a fantastic arrangments in offering materials,
and practically he did a excelent and superior job. This is a album not only for guitar aficionados and freaks, but also for
listeners with refine tastes...

Posted by Branimir Lokner at 8:31 PM