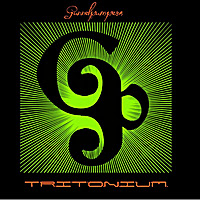 
Gunnelpumpers are Chicago based colective,  whose musical activities dated from 2002 year. With actuelle one, a group has released a
3 albums, a fourth will be look a light of day during the 2013 year. A band are consists of  6 members , with unclassical performing
orientation.In its line -up are 3 bass performers, drums and conga players and guitarist. " Tritonium" , their 3rd album are consists of
3 longest themes, full of intuitive and passionate playings , where improvization is a key element of its general approach and
authors and conceptual view. Judging by stylish orientation, in its approaches we can find clear elements of fusion and progressive
details, as same as different forms of experimental variants. Psychologically, they also accepts something  of krautrock elements,
especially in arrangments includings. They are also inspire by the 70's acts , but we can threat a band's concept in many aspects
as a modern too.  " Tritonium" deserve a repeatable listenings, even that band's message isn' t easily acceptable for the wider
audience...

Posted by Branimir Lokner at 8:40 PM