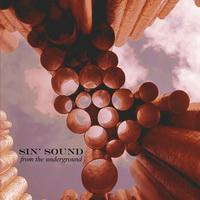 
Out of Brescia, Italy comes a band Sin' Sound, consists of  musicians with expandier previous experience. They works as a
septet with saxophone and trumpet in its line-up. During the October of previous 2012 year, they have released a full-length with
9 tracks in, entitled maybe a little pretencious - " From The Underground ". A group musically combine a various rock elements in its
approach, as a classic rock variants, funk, psychedelic and rhythm and blues as well. They also mixes up older and newer tendencies,
and its authors views are at the same time original and unusual. They aren' t a pretty melodic, but melodic lines also take a important
place in its performing realization. I can not compare ' em  with any well or less known acts, and some unclassical arrangments resulsts
characterize its performing and authors visions too. " From The Underground" on the other hand, realistically introduces group in its first
discographical steps.

Posted by Branimir Lokner at 10:29 PM