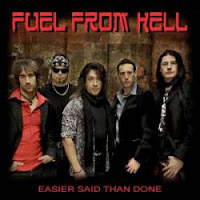 A roots of Italian act Fuel From Hell dated from 1998 year. During the forthcoming years, a group has participated on some
compilations, and released a one EP and 2 full-lengths. " Easier Said Than Done" is a actuelle product, a CD with 11 tracks in.
Italians are on the field of 80's hard rock/sleeze rock variants, with also some hair metal additionals as well. They sounds as a
coherent team, and its songs are also melodic and listenable too. " Easier Said Than Done" are consists of equalizing materials,
and some comparizions leads to acts as a : White Lion, Great White , Dokken...A recomandable tracks from albums are :
" Poison Whiskey", and " Send Me Your Love" ....

Posted by Branimir Lokner at 8:34 PM