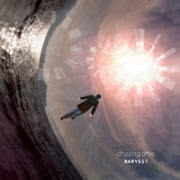 Out of Barcelona comes a Harvest band, formed in 2008 year by  keyborder Jordi Amela and guitarist Jordi Prats. Both musicians
were previously active in group Dracma, and with mentioned band they have recorded a 3 albums. In its line-up Catalonian group
have a female  Dutch vocalist - Monique van der Kolk. Her beautiful vocalization is a important part of group's general  exposure.
" Chasing Time " is a second offering, and what is also interesting,  Alan Reed ( ex-Pallas ) and Steve  Rothery from Marillion,
has participated in their album. Harvest is a serious act, and musically they are faithfull to folkie side of progressive tendencies,
and in some aspects they know to associate on groups such as a Renneissance or Camel. Some comparizions also leads to
a groups as a Mostly Autumn and Marillion , but Harvest as a band draws  many different aspects of its works and offerings.
A harmonization in songs, as same as colorful arrangments creations, characterize complete album materials in general. Technically
all other aspects satisfies as well, and I would also recomand a cleverly threated production. Fine work and listenable product too.

Posted by Branimir Lokner at 10:30 PM