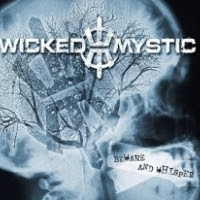 The important rola in history of Dutch thrash metal during the period of the 90's belongs to Wicked Mystic group. A band has released
3 albums, also supported to many well-known acts, and received a respectable recognition. But, almost a decade they didn' t work,
and after a reunion in 2011, a new chapter in its carreare starts. " Beware And Whisper" is a actuelle offeing, digi CD with 11 tracks in.
A Dutch quartet is faithful to older school of thrash variants, but judging of modern productional work, and fresh present energy, thay also
accepts a standards of our time. Its materials are raw, and unpolish, at the same time brutal and agressive. They have also
offered an equalizing songs, with one bonus track, cover of well-known Exodus piece - " Bounded  By Blood". Wicked Mystic are back
with " reason", and " Beware And Whisper"    "satisfie in many aspects...

Posted by Branimir Lokner at 9:35 AM