SPLATTERS - Fear From The Park 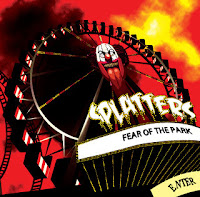 SPLATTERS - Fear From The Park

Even that guys from Italian act Splatters have been cruisin' around for some period, they have discographically debuted during
the March of previous 2012 year, with " Fear From The Park " album. Italian fellows are obsessed by B Horror movies, and also
with the late 70-s and begining of the 80's musical direction. Its style is something between Ramones, Misfits and Alice Cooper
variants, fulfield with some other thrashy additionals.  They are rough and unpolished, but pretty sincere and realistic in own
statements too. " Fear From The Park" are consists of 11 tracks in, with similiar approach and also raw productional includings.
On the other hand, they sounds as a coherent team, with more or less equalizing present materials.

Posted by Branimir Lokner at 8:37 PM