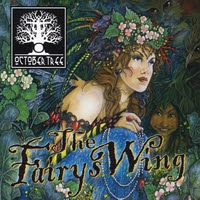 
Out of Maryland, comes a band/project October Tree, headed by wife and husband Tammy and Greg Lounsberry. They have released
a conceptual album, entitled " The Fairy's Wing", based on fantasy book, written by Greg Lounsberry. What we have here is a full-length
with 10 tracks in, done in progressive / progressive rock mood. Musically, a group is influental by the British movement from the
70's period, and also by the bands as a : Rennaisance, Camel and Barclay James Harvest. On the other hand, October Tree has offered
a pleasent and sophisticate work, with clever arrangments includings and excellent productional additionals too. This is also a listenable product
especially interesting if you are a fan of so call older progressive variants.

Posted by Branimir Lokner at 8:33 PM