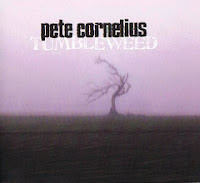 
Pete Cornelius is a well-known name, not only on Australian blues scene. He worked with De Villies group, and also participated
with many musicians, not only on national scene. His solo carrer is also successfull , and " Tumbleweed" is a his latest, still actuelle
offering. " Tumbleweed are consists of 10 tracks in, 6 authors creations,and 4 covers, where especially Pete version of  N. Young - " Mr. Soul" song   deserve a respectations. But generally, Pete has offered a right portion of blues, rhythm and blues and rock elements,
with clever performings, wise arrangments includings, and modern productional additionals as well. A musicians from following band also
did a fine job, and generally we have here a pretty interesting product with more pleasent elements.

Posted by Branimir Lokner at 7:59 PM